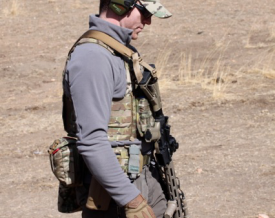 A.J. has been a EMT/Paramedic and Firefighter for the better part of a decade. Having received his training in the violent neighborhoods of the greater Chicago area he has seen firsthand and treated the effects of gang and gun violence. This initially started his passion for the 2nd amendment and self-defense. He has seen all too well what real life scenarios play out as and the reality of gunshot wounds are and what’s lethal and what’s not, what’s practical and what’s hype. A.J. moved to the Denver area in 2009 where he works as a Firefighter/Paramedic for a fire department south of Denver. His primary role will be as on site medical provider in case of injury and also to relay what he’s learned on the streets when it comes to handgun wounds and realistic defense scenarios. He will also provide basic and realistic first responder medical instruction to those who desire it. For instance what to keep on you at all times that can treat severe injuries before receiving definitive care from a hospital. A.J. has received weapons training from some of our Nation’s best, US Army Special Forces and is a NRA pistol expert.