Our training staff is comprised of dedicated professionals whose primary objective is to ensure that you obtain the highest level of training available.  The safety of our students is our highest concern.  Our firearms training is based on a progressive methodology which utilizes laser training equipment from Next Level Training, allowing us to diagnose and correct the implementation of a skill during dry practice, before a single live round is fired. The end result for our students is a safe training environment conducive to the highest level of performance. During our self defense training, great care is taken to ensure that students understand all aspects of the skills to be learned. We do not teach techniques, but rather the principles which lead to the techniques. In doing so, the student is cognizant of what needs to be done in order to train safely without injuring himself or a training partner. 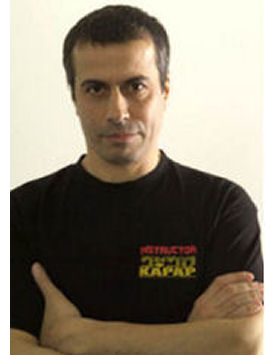 Major Avi Nardia (IDF Res.) is one of the leading official instructors for the Israeli Army and Israeli Police in the field of Counter Terrorism and CQB (Close Quarters Battle). He specializes in training Special Forces, counter terrorism units, military, law enforcement, and civilians (including disabled society) all over the world in self defense as well as both modern and traditional martial arts. He served in a special police unit as an intelligence team member and as a defensive tacticts/CQB instructor, with the rank of Staff Sergeant Major (NCO). In his 24 years of service in the Israel Defense Forces (IDF), he earned the rank of Major, took part in the “Shlom Hagalil” war, serving 3 years outside of Israel’s borders.
Major Nardia has trained law enforcement agencies and military units all over the world, including but not limited to Police Patrol, Correction Officers, SWAT, SRT, SERT, as well as Army, Marine, and Special Forces.
In Israel, he taught defensive tactics and operational behavior at the Operational Police Academy, which is charged with training the country’s entire police force.
He is one of a handful of instructors to have been an official instructor for the Israeli army, Israeli Police, and Israeli counter terror units.

Major Nardia specialized in teaching civilians Kapap at Tel-Aviv University with Lt. Colonel Chaim Peer, one of the founders of Kapap. He also taught at Bar-Ilan University and Spivak Handicapped Center.

Courses ranged from Traditional Martial Arts to Olympic Fencing and Theatrical Combat at Tel Aviv University. He was also involved with the Israeli Social Service program in teaching Kapap-Self Defense to battered women and rape victims.

After receiving certification as an Athletic Trainer from the Wingate Institute, he was the Physiotherapist /Athletic Trainer for the Israeli National Rugby team for five years, and participated in the World Rugby Sevens Games in Uruguay in 1995 and 5 International Macabia Games. Major Nardia also spent two years as the Athletic Trainer of the Herzliya National League Handball and Basketball teams, dealing with various sport injuries.

Benjamin Krajmalnik holds a degree in Aerospace Engineering from Texas A&M University.  Having worked for 15 years in the Defense and Medical Device industries in Engineering and Quality Management roles, he decided to go on a different path and established QSD Consulting, LLC, as a company through which he could offer consulting services on various aspects.   In 2008, Benjamin began operating the Defensive and Firearms branch of the company.

Benjamin served in the Israel Defense Forces Home Front Command and was a volunteer police officer in the Israel National Police.